The restaurant where everything is 3D printed, from the food to the chairs

When diners at London pop-up restaurant Food Ink sat down to dinner last week, they may have been thinking about the fine dining menu of Mediterranean cuisine they were about to enjoy. But their meal was a little different to most served at haute gastronomie events: it was all 3D printed. And it's not only their food that was made locally by 3D printers: the restaurant's fixtures and fittings were too, from the knives and forks the diners used, to the chairs they sat on.

For three days and three special meals, Food Ink took up temporary residence in a Shoreditch side street to showcase the versatility of 3D printing.

During the day, the pop-up was opened as something of an exhibition space for the technology, where the public could see 3D printers and pens at work, and try some 3D printed snacks. At night, the pop-up became boutique restaurant, where 10 diners per sitting paid over £250 a head for a nine-course menu, printed during the meal while they watched.

"Since I was a kid I was always interested in science fiction, and where I'm coming from today is really about blurring sci-fi and reality, and 3D printing connects to a lot of people because of that," Antony Dobrzensky, Food Ink's cofounder and director, said.

"I began exploring the idea of doing something with 3D printing that could connect to the public and I came to the conclusion that food, the universal language... was probably the best way to bring what is otherwise an exotic, intimidating, confusing subject to the mainstream." 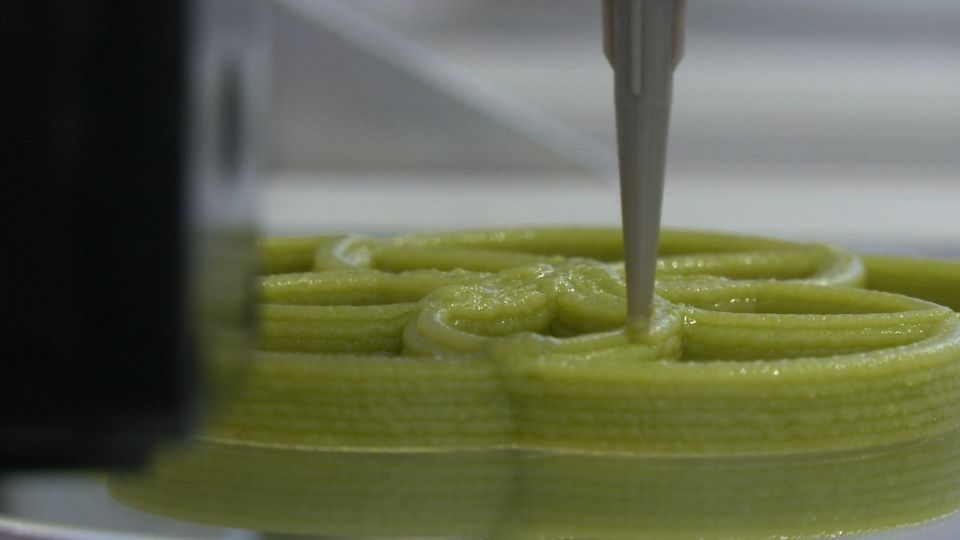 The restaurant's pale, geometric stools and table legs are being created by architects Mamou-Mani, using a custom Grasshopper 3D program written with the furniture in mind and Hypecast's Delta Tower printers.

Food Ink teamed up with Dutch 3D printing startup byFlow to work on the pop-up restaurant after meeting at a tech conference. The family business, based in Amsterdam, had originally been focused on building and selling portable 3D printers. The decision to look at making food came after Floris Hoff, the company's CTO, spent some time experimenting with 3D printing chocolate structures while studying industrial product design at the Dutch research institute TNO.

"We know a lot about technology, we can be innovative about that, but we knew almost nothing about food ... so that was why we needed to search for a good chef," said Nina Hoff, ByFlow's CEO. After Floris spent a week interning with a Michelin star chef and working on a 3D printed dessert -- a globe made of chocolate hiding a segmented interior full of more treats -- the company was able to meet more top chefs. 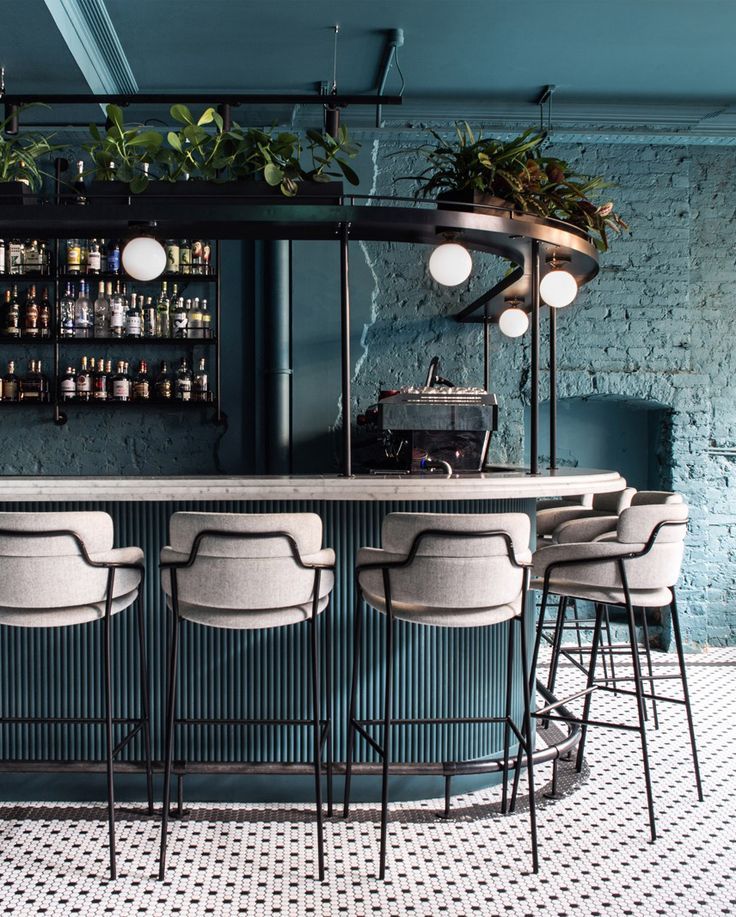 The menu for the three evenings at the Shoreditch pop-up was created by Joel Castanye and Mateu Blanch, chefs at the Catalan restaurant La Boscana, and featured obliquely-named dishes including Cosmic Delight and Tetris Tapas.

First and foremost in their minds was food that tasted good, 3D or no 3D printing, the two chefs said: they wanted to capture the flavours of the fruits and vegetables of Catalonia in 3D printed form.

Their experiences of using food for 3D printing also began with experiments with chocolate, before progressing onto using foods like hummus whose textures lend themselves to being 3D printed.

The chefs and technologists worked together to create the complex designs for the pop-up food. "We know that for food printing you need paste materials -- it cannot be too liquid but it also cannot be too thick, so that's very important. Also we can help with making the designs -- we know exactly how the printer adjusts to what type of designs, it's really a collaboration. 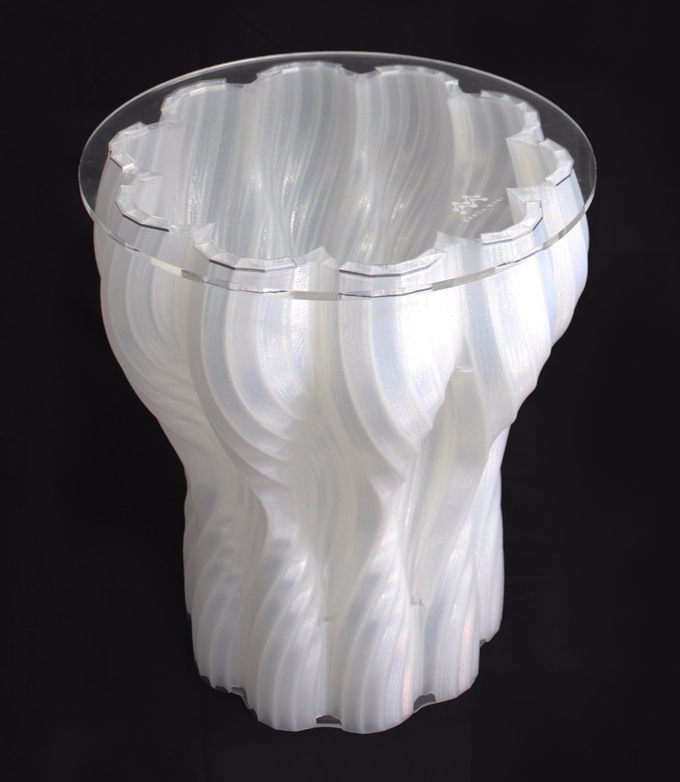 The chefs know about the flavours, we do the technical part," ByFlow's Hoff said.

After opening in London -- because "London is really open-minded and supportive of innovative initiatives in food, technology, and design, and this is at the intersection of the three" according to Food Ink's Dobrzensky -- the pop-up restaurant will be popping up in more cities in the coming months. Food Ink plans to take the pop-up to Amsterdam, Rome, Barcelona, and Berlin in September and October, then making its way to New York before the end of the year.

Food Ink has already had discussions with business from Singapore to Dubai about the possibility of setting up permanent 3D restaurants. Dobrzensky hopes to eventually open a chain of 3D printing concept-dining spots, in the model of themed chains like the Hard Rock Café, or Dans Le Noir.

Chocolate printed at the London pop-up.

The chain may take a while to open its doors, however, thanks largely to the pace of 3D printing technology development. 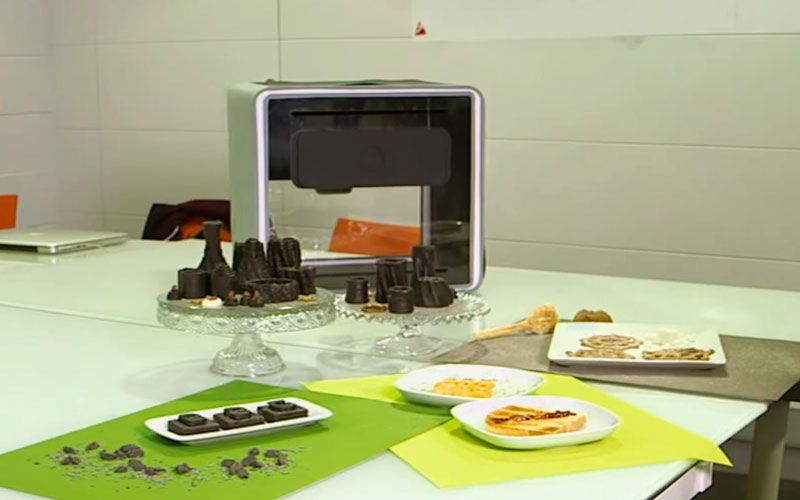 Currently, 3D printing is just too slow and too expensive to allow the opening of a restaurant using the technology which is still accessible to consumers with mid-range budgets.

"It will be some time, perhaps some years, until we see something on the level of a McDonalds that is entirely 3D printed... this technology is amazing and it's improving exponentially, but it's still this first generation, and we're somewhat constrained by the technology in the sense that the speed and the number of printers you can have means it's better to go for a quality over quantity experience," Dobrzensky said. "That's why from the beginning we focused on a Michelin-calibre, many-course, real gastronomy experience."

As the technology improves, the company plans to introducing a more wallet-friendly version of the pop-up nights, as well as continuing to offer 3D printed fine dining like the three nights in London.

Looking back on the first night, Dobrzensky said: "there were many aspects already we know we can improve, but I had been immersed in it for so long, and by team has, that I had become desensitised to it. I had to take a step back later that night after the last course. I walked outside the restaurant and looked through the window, and I saw nothing but smiles and laughter and excitement."

The Interior of the Smoke Table ©Mamou-Mani

General View of the 3D Printed Furniture at Food Ink

Close-up on the Byflow Food 3D Printer at Food Ink

Displaying the varying e-values in our Gcode ©Mamou-Mani 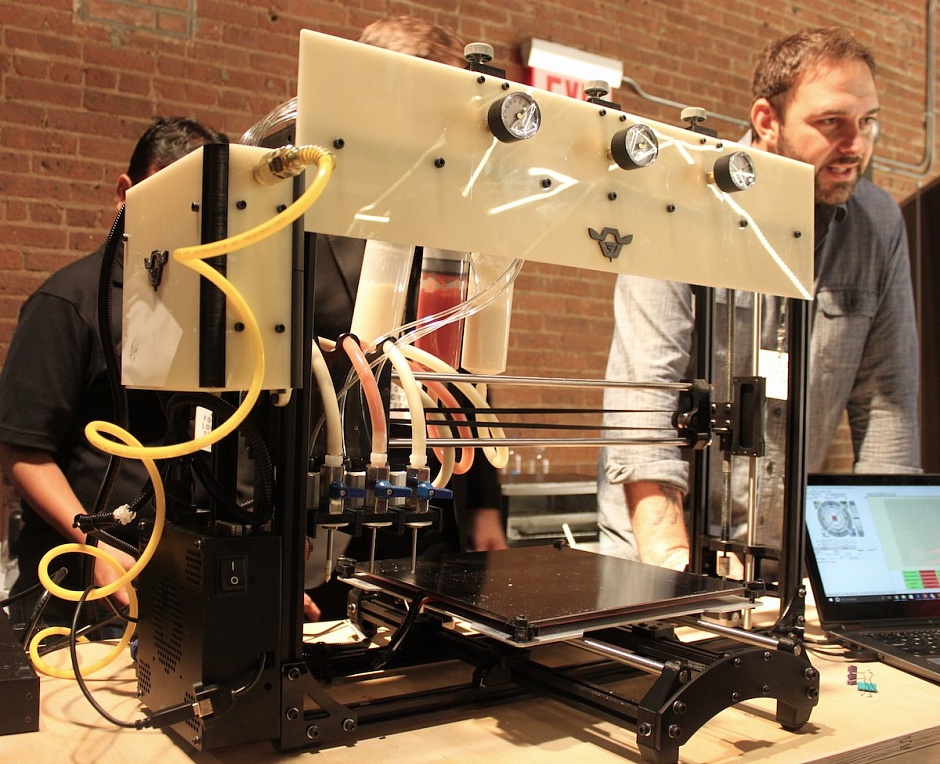 Our Smoke Stool has been listed as a 3DPC Finalist 2017 of the Pioneers Challenge 17.

Bringing together architects, artists, chefs, designers and engineers, pop-up restaurant Food Ink. has laid claim to the title of “world’s first 3D-printing restaurant.” The restaurant utilizes 3D printers produced by Dutch company byFlow to create dishes out of hummus, chocolate mousse, smashed peas, goat cheese or pizza dough – essentially anything that can take the form of a paste.

The paste can then be fed through the extruder to create culinary sculptures. Food Ink.’s mission is to explore the intersection between dining and technology-enhanced user experience. According to their stated philosophy, the team is “putting [to] work most innovative technologies, like 3D-printing and augmented reality, in order to elaborate the most exquisite interactive edible experience. 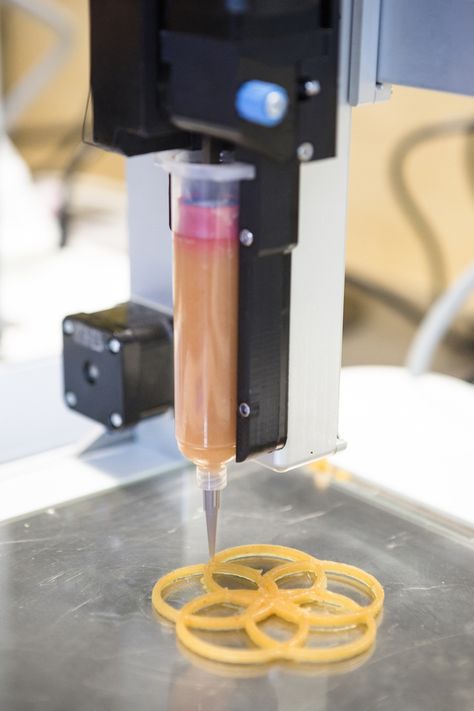 In addition to translating geometries into 3D printing pathways, Silkworm allows us to manipulate the internal geometries and structures of his designs to fit desired time, speed, and build constraints. To ensure the stability and strength of the 3D printed stools, Mamou-Mani incorporated a truss structure into its walls, ultimately allowing for a sturdy, hollow, and materially efficient structure that could withstand being sat on.

In designing the whole collection, which consists of a number of different designs, Mamou-Mani and his team generated a matrix of potential chair designs which took into account the desired speed of the print, the angle behind the print, and a number of other factors. The result was a range of design families that fell into these constraints. To account for the height limitations of the 3D printer, some of the pieces were designed with male/female connections for possible extensions.

A restaurant has opened in London where everything from food and dishes to furniture is printed using a 3D printer, reports the Daily Mail.

The institution opened in the capital of Great Britain at the end of July.

Meals cost around £250 per serving. 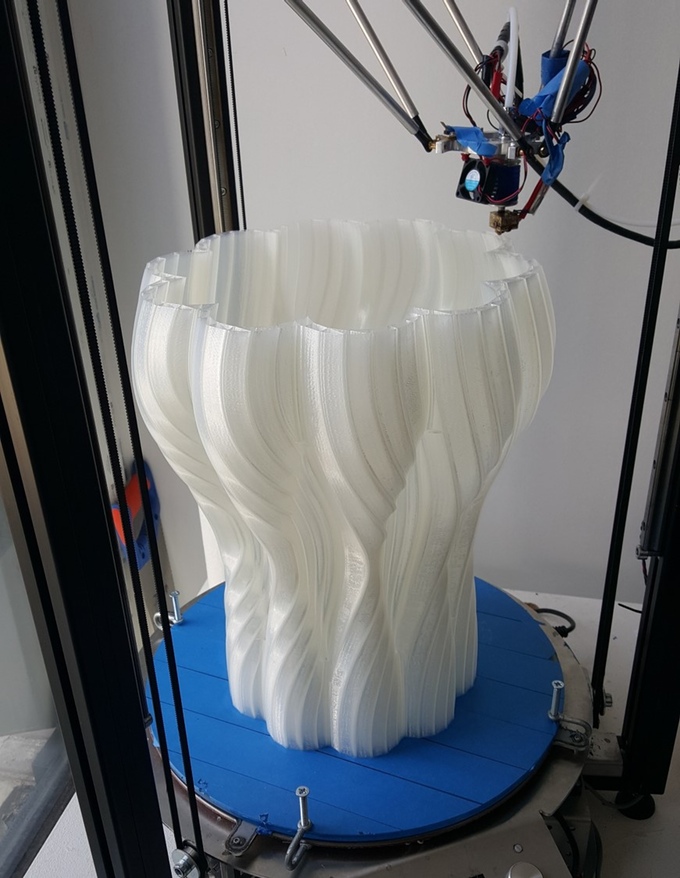 If you notice an error, please highlight the incorrect text and press Ctrl+Enter - this way you will help us improve the site. Thank you!

3D technologies are coming to restaurants 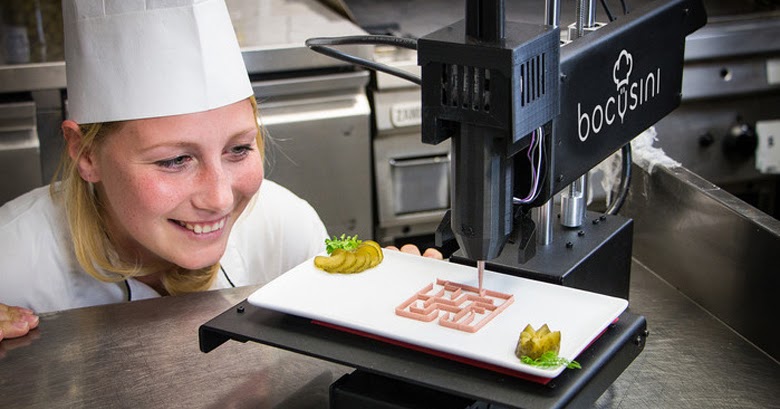 The creators of the Food.Inc. project, who recently opened a molecular cuisine restaurant in London, continue to promote their idea. This time a similar institution opened in Spain.

Founders of the Food.Inc project. open restaurants where food is prepared using a 3D printer. In their opinion, now this direction is becoming widespread: people like to try something unusual and striking their attention. 3D technologies make it possible to prepare dishes that can never be reproduced by the hands of a chef.

London project, Food.Inc pop-up restaurant. appeared this summer. Everyone, residents and guests of London, has already been able to try the dishes that are printed on the printer. By the way, all interior items and even cutlery are also made on a 3D device. According to the British publication EveningStandart, the restaurant is open during the daytime, and guests can watch the pop-up window, see the work in action, and try various 3D printed snacks. 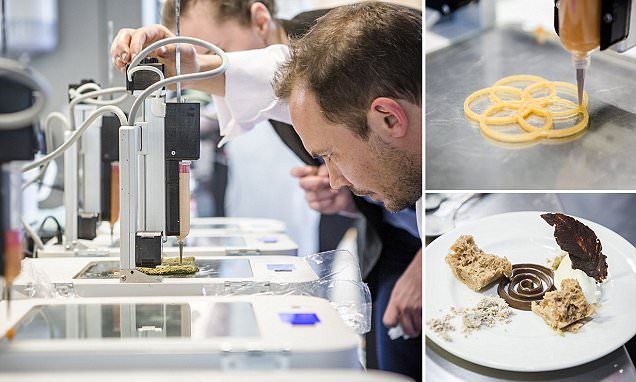 Each dish is prepared with fresh natural ingredients. The printers are provided by Food.Inc. project partners, byFlow Focus. Unusual cuisine is produced by chefs - Matthew Blanch (Mateu Blanch) and Joe Castanye (Joel Castanye), known for the restaurant La Boscana, located in northern Spain. Joe Castagne is also known for his work at El Bulli, a Michelin-starred three-star restaurant near Barcelona.

Dinner in a Spanish restaurant will cost 180 euros, although the creators are ready to make a budget menu as well. By the way, in London, a dinner of nine "printed dishes" costs about 300 euros.

The creators of the project are confident that they are "the first to come up with such an initiative, when in a restaurant each element is printed on a 3D printer, and the food is prepared from a large set of ingredients."

Food Ink's vision is to create gourmet restaurants where all food, utensils and furniture are entirely 3D printed in an immersive futuristic space. 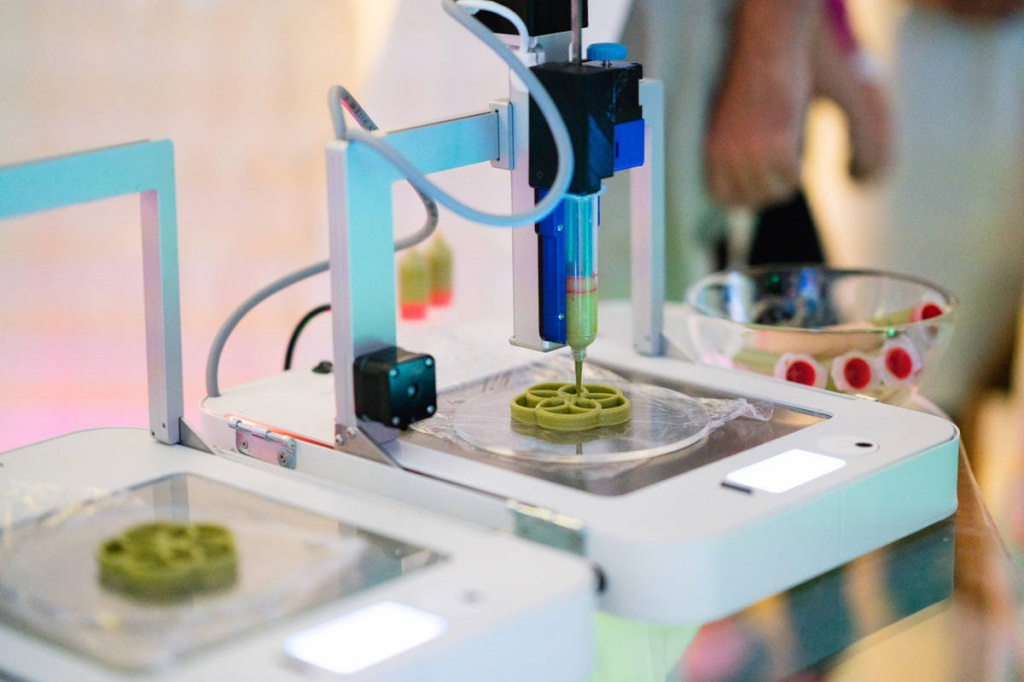