Millennium Falcon Project: A Mad Rush And The Largest 3D Printer In Europe

I was working in Pinewood Studios, England, when I was informed I had an interesting job. My eyes brows raised a little, but much much higher when I was told I would one of their team bringing to life a Lucus Film Millennium Falcon!

It was decided that the Falcon would be 3D printed within the studios, from the actual original Lucus Film digital plans. The 3D printer was a little out of the ordinary; it happened to the be the largest in Europe!

I was told to be prepared to art-work the Falcon; after the pieces were assembled by several model makers who I had been working with at the time.

The 3D prints came through until a table was filled/covered with rather stunning familiar Falcon parts. The model makers immediately set to painstakingly putting there Falcon together piece by piece, and there were many!

I began to work on a test piece; namely the engine port above the Falcon Entry point. I was given several reference books, namely making of starwars and several 2D prints of the original Falcon. Whilst I was having fun making up a paint palette for the base coat, panels and the smoky carbon look details, I witnessed the model makers make a polystyrene base support to accommodate the falcon top and bottom shell-like forms; but also to save a lot of weight.

Lots of tuning was required to fit parts to other parts, to make accurate to the paper Lucus Film Falcon plans that were laid upon the table. The Falcon was fitted to a pole between two stands in order to work from all sides, though the fittings looked pretty tricky to get precisely locked into the next piece. Meanwhile I was happy with the colour tests for the Falcon base coat and started to re-create the subtle warm reds on various panels of the Falcons bodywork. 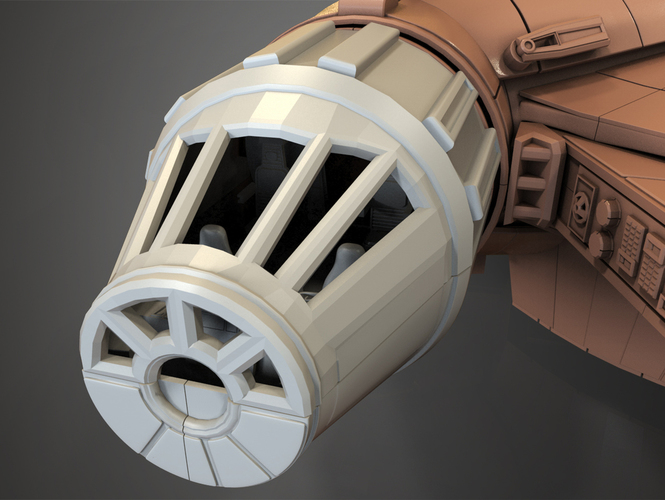 Finally after many hours of fitting and tuning, the Falcon’s assembly was complete and it measured around five feet long; pretty much the exact dimensions of the original filming miniature used on Star Wars – A New Hope.

The Falcon was fitted with the rectangular dish; to mark it as ‘The Force Awakens Millennium Falcon’. Then the Falcon was handed to me; the last but I suppose crucial link in the chain of bringing the Falcon to life.

I was a little overwhelmed to see this grey primed mass of printed plastic before me. Even so, it still looked stunning and oh so familiar! I airbrushed the base coats which were a set of off warm white glazes to give some feel of depth. After I concentrated on each panel; many panels had their own unique specific detail. I applied liquid latex on certain areas where damage had been inflicted by laser, near misses, space debris and general wear and tear. I applied subtle warm artists acrylic reds over several panels, keeping faithful to ‘original Falcon filming miniature’ references. 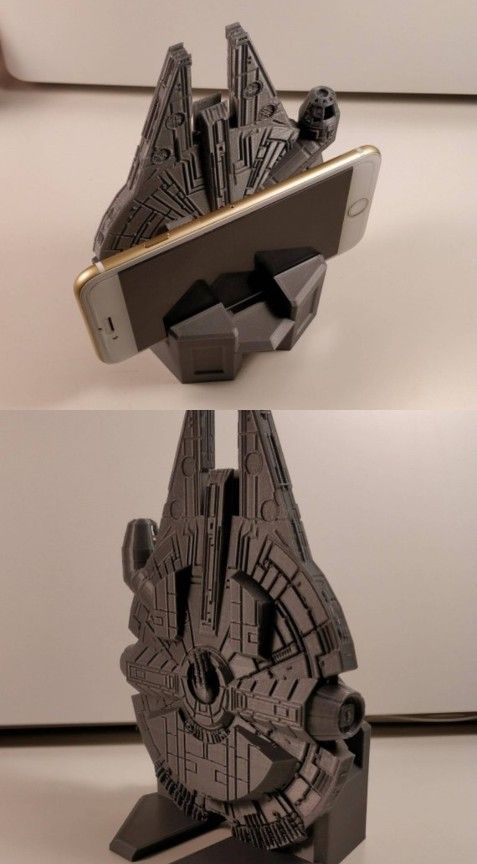 After the general colours were applied and dried, I removed the liquid latex with a craft knife very carefully; the result worked like a treat. I made up a dirty glaze/wash top breakdown the Falcon’s still too fresh look. This aged the bodywork effectively; telling a little more of the journey the Falcon had undergone. I started to wok on the surrounding sides of the Falcon, where an exposed mass of pipes were. I applied to them a rusty glaze/wash which also lent to the Falcon, a feeling of being rundown somewhat.

Meanwhile the model makers were building a stand for the Falcon to perch upon. The stand was angled interestingly and covered with mirrors to enable the viewer to see the falcons underbelly.

I was approached by the powers that be in the studio; informed the art-work should be completed within a couple of hours. Now considering I had only been working on this for just two days, I had to hurry up a bit; however I was nearly there.

Lastly I airbrushed a build up of smoke and carbon around the areas exposed by enemy laser fire. 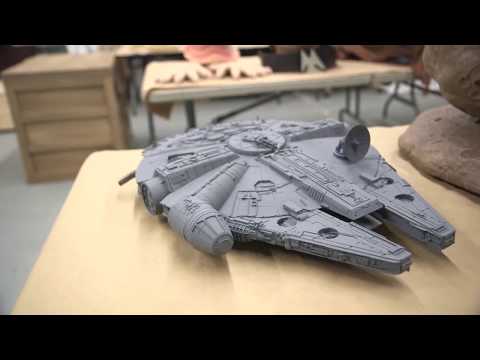 I applied that smokiness to the engine port outlets. Next I applied subtle ‘metal knock and scrape’ damage to the paintwork; just little details that concluded the whole ‘worn and hard lived’ look.

The Falcon was then packed into a freight case and sent to Disney/lucus Film Studios in America. I felt a sense of deep satisfaction.

Looking at the Falcon in the end, I was happy with the final resulting look and feel. Yes I could have had more time to add and add, but with the time restraints, I was forced to look at the vital areas. This was also a blessing in disguise, which helped me capture the character of this much loved spaceship!

Any insomniac can tell you about the deep questions that plague them at 3AM when they’re desperately trying to get some much-needed sleep. What happens after death? Who decided that salt and pepper should be the two seasonings that absolutely everyone has on their tables at all times? Seriously, what is the deal with the platypus? I wonder how long it took to build the Millennium Falcon?

I can’t provide conclusive answers to any of those questions, but I can say with some confidence that the answer to the last question is “a really freaking long time. 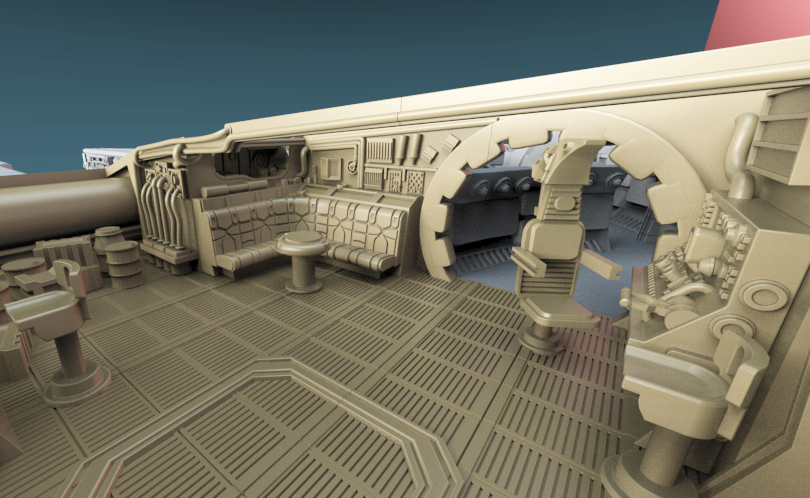 ” After all, it took a team of engineers and designers from 3D printing marketplace Gambody several months to design, print and assemble a 3D printed replica of the iconic Star Wars ship at a 1:34 scale. The time and effort were worth it, though; Gambody’s mini Millennium Falcon is incredibly detailed, accurate and, frankly, quite beautiful to look at. It’s obvious that its designers are an experienced and skilled crew.

Gambody, which launched in 2014, is an online marketplace dedicated solely to the designing, buying and selling of 3D printed game models. The intersection of 3D printing and gaming is something we’ve talked about many times, and Gambody and its community of enthusiasts really exemplify this particular niche. It operates much like any other 3D printing platform, in that users can create accounts to upload and sell their own designs, but the site also has a team of in-house designers who design and sell a significant amount of work, including the just-released mini-Falcon. 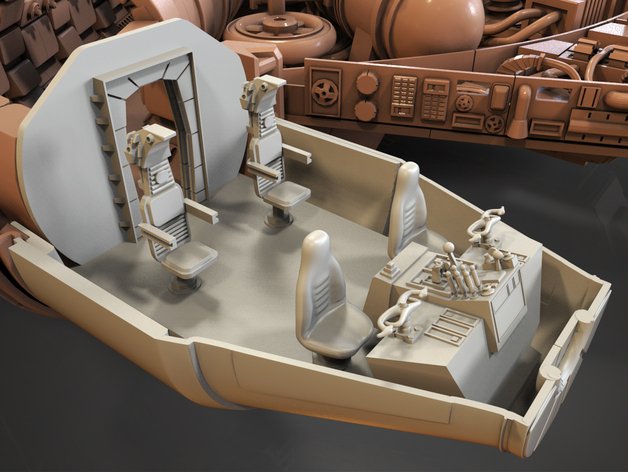 Like Gambody’s other products, the baby Falcon is sold in STL format; this particular model consists of over 200 parts. Currently the site is selling the Standard Assembly Kit, which costs $74.99 and consists of only (!) 176 parts making up the top and bottom hulls. An additional kit will be released later this year with files for the interior layout of the ship.

“We divided the spaceship into several parts so that they could fit onto small heated bed of home 3D printers,” says Yurii Efimov, co-founder of Gambody. “The model’s top and bottom hulls consist of 176 parts; additional external elements make up another 60 parts. We broke the spaceship down into several kits on purpose, to please all requirements. Let’s assume that someone will want to 3D print only the model’s hull and hang it on the wall. Therefore, there’s no sense in this person to print all internal layout components. Also, it is likely that someone will want to use the spaceship’s hull as a PC body frame. 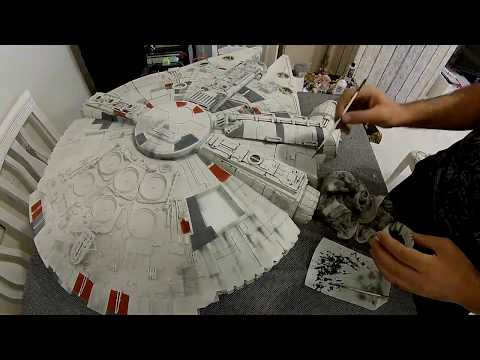 The design team spent 800 hours modeling the ship, which is 717mm wide, 1000mm deep and 244.46mm wide and features minute details such as secret compartments, wiring and ventilation systems, and functional landing gear. If you decide to print your own, be warned – it’s no small task. According to Efimov, you’ll need at least 3 standard rolls of filament and “2-3 months of intensive printing, depending on the type and quality of your 3D printer.” Assembly will likely take another month, but that’s the fun part. The team recommends printing your model at a 0.01mm layer height for optimum results.

Gambody designed its ship based on Star Wars Wiki sketches, and the team is still working on additional improvements and modifications, including changes to the boarding ramp and mechanical chassis. Hopefully, the model won’t require as much maintenance as the original Millennium Falcon, although that would add a certain air of authenticity. If you’re ready to start printing your own, there’s plenty to work with, and Gambody has also provided an instructional video (see below) for when you’re finally ready for assembly. 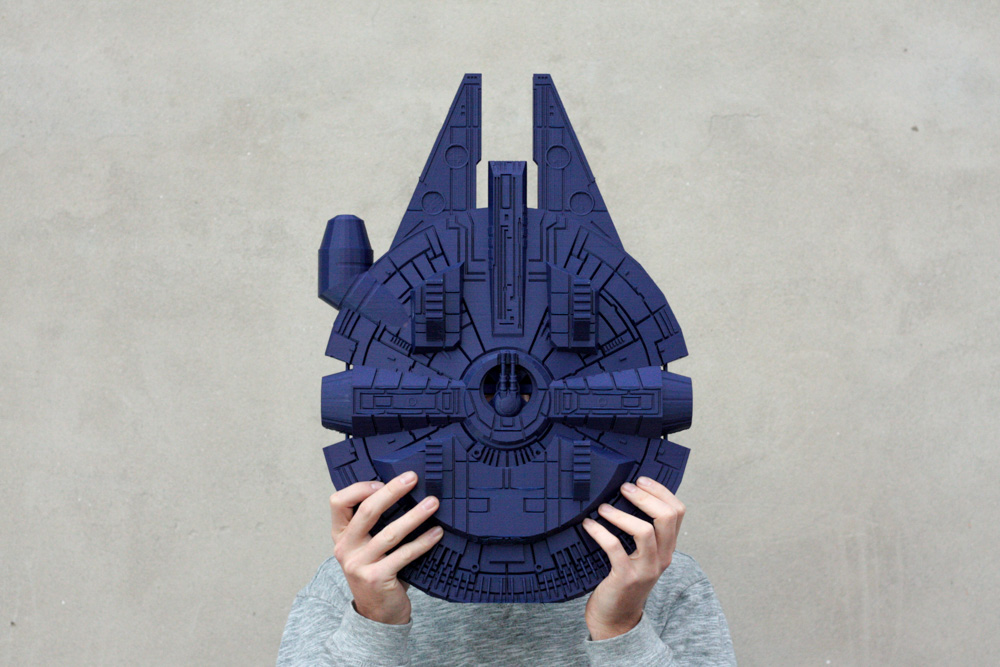 Discuss in the 3D Printed Millenium Falcon forum over at 3DPB.com.

What have the exhibitors of the 3D Print Expo at VK Fest 2016 prepared for you!

The most grandiose event of this summer - VK Fest 2016 - will take place very soon! Something incredible will happen in the innovation zone of the festival, because here, with the superhuman efforts of the exhibitor of the 3D printing and scanning exhibition 3D Print Expo, the amazing world of the future will come true!

Magnum 3D is bringing Han Solo's iconic 3D printed Millennium Falcon spacecraft to the festival, which will be a gift to one of the participants, BQ will surprise everyone with robots and other interesting things, and Fallout fans will be able to try on the legendary power armor helmet printed by Print product. 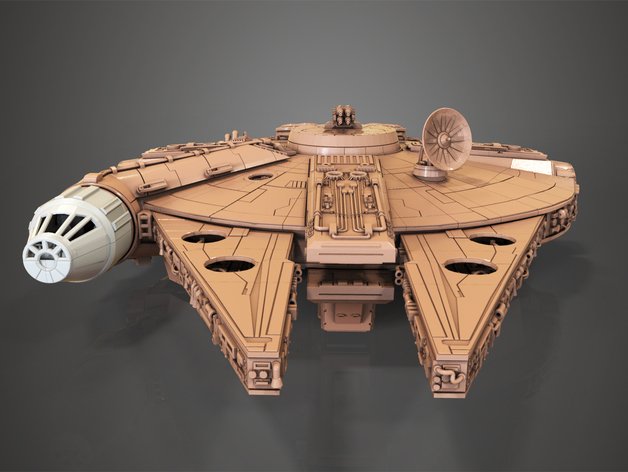 What have the exhibitors prepared for you?

Do you want to be on the wave of innovations, win an incredible gift and get a lot of positive emotions? Welcome to the 3D Print Expo exhibition in the Innovation Zone of the VK Fest 2016 international festival, which will be held in St. Petersburg on July 16-17.
And those who want to see the world of 3D Print in full, come November 17-18, to the exhibition 3D Print Expo in the Sokolniki Exhibition and Convention Center (5th Luchevoy Prosek, 7, building 1, pavilion 2) and discover the real world of 3D technology. 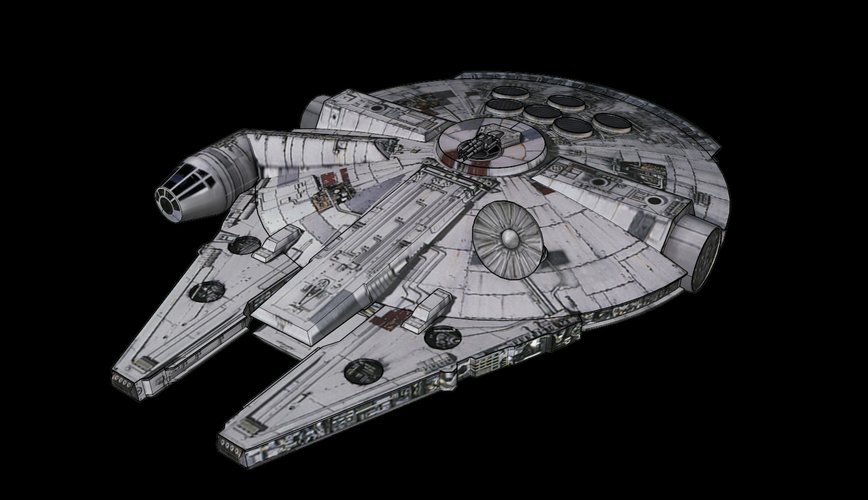