3D printed gun is always been a topic highly controversial. However, this controversial field still left a pure land, which is irrelevant to politics and laws, 3D printed guns from video games and anime. We will list 10 popular 3D printable virtual guns below, you can 3D print your favorite on your printer for fun.

Destiny 2 is a popular online-only multiplayer first-person shooter video game developed by Bungie. Players assume the role of a Guardian, safeguarding the last safe city on the Earth. They are committed to protect humanity from different alien races and combat the looming threat of the Darkness.

"Yours, until the last flame dies and all words have been spoken.”

The Last Word is the gun belonging to Hunter Jaren Ward. It gets its name from the conversation between himself and the petty tyrant Loken. After Jaren’s death, the gun passed to his adoptive son Shin Malpher, who used it in his legendary battle with the fallen Guardian Dredgen Yor.

This design is a full-size model of The Last Word gun, it’s reloadable and shootable. You can use the spring out of a ballpoint pen for the trigger spring. There is also the file of bullets available.

"Folding was never an option."

Ace of Spades, which is named after Cayde-6’s son, is the signature gun of the Vanguard Hunter Cayde-6. This hunter-exclusive Hand Cannon was introduced in The Taken King and reintroduced in Forsaken.

The designer of this model provides 2 different files that allow you to choose depending on your skill. You can 3D print the gun with many fine parts so that you can get a full-size functional Ace of Spades. 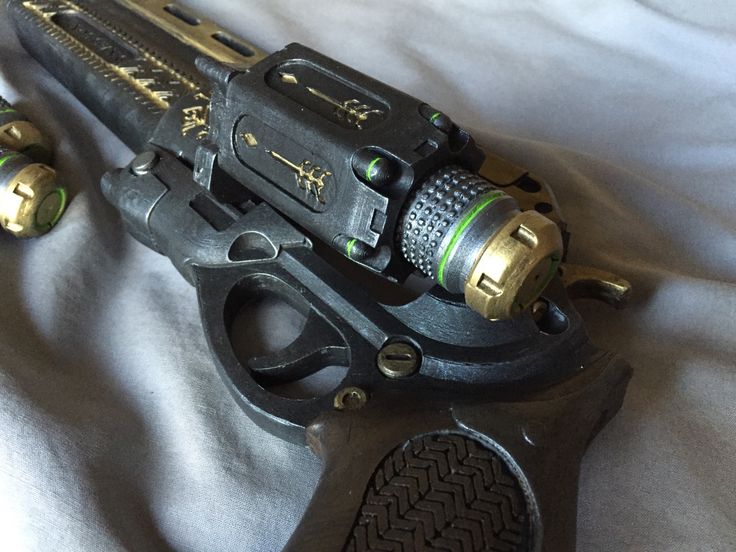 Or you can 3D print it in a simple structure which will save you a lot of time on assembly.

"We are small, but we are legion."

Rat King is considered one of the most epic weapons in Destiny 2. Named after an apocryphal phenomenon called a Rat King, which is an omen of bad luck where several rats have their tails fused together.

With all these fine patterns of rats on the gun, it’s a great job. The assembly and painting part can be tricky, but all the work is worthy. You will get a fantastic 3D-printed weapon model.

"Long, short, they all end the same way. 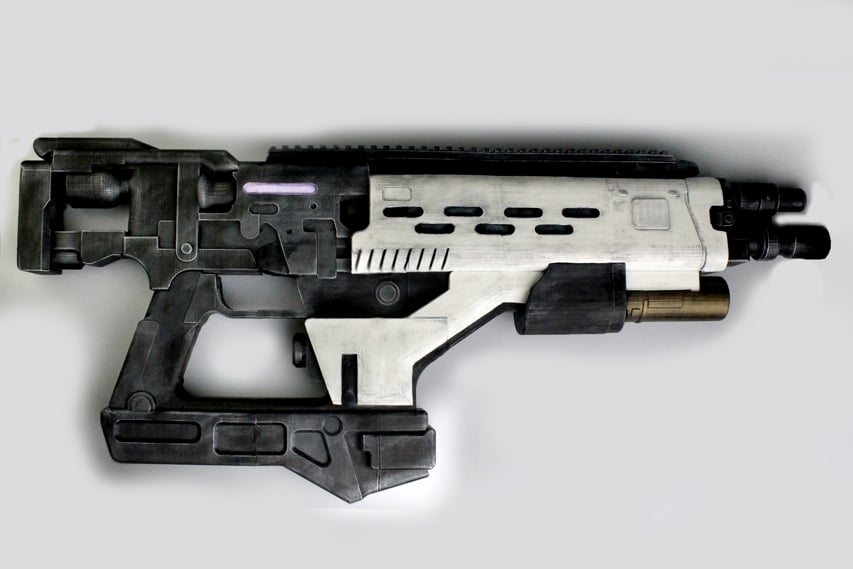 Dead Man’s Tale is a scout rifle that can be acquired from the completion of The Voice on the Other Side Quest in the Season of the Chosen of Destiny 2.

After 6 times updates, this model of Dead Man’s Tale can be considered as perfect. There are 40 STL files in total with the assembly instructions that guide you to clear up the build. But the assembly is still a challenge.

"Nothing kills a Guardian faster than another Guardian."

In Destiny 2, the hand cannon is a kind of very popular weapon type. Malfeasance has an impressive design in video games and 3D printing with hollow-out bodies, flowing lines, and powerful shootings.

This design of Malfeasance hand cannon also can be triggered after assembly. 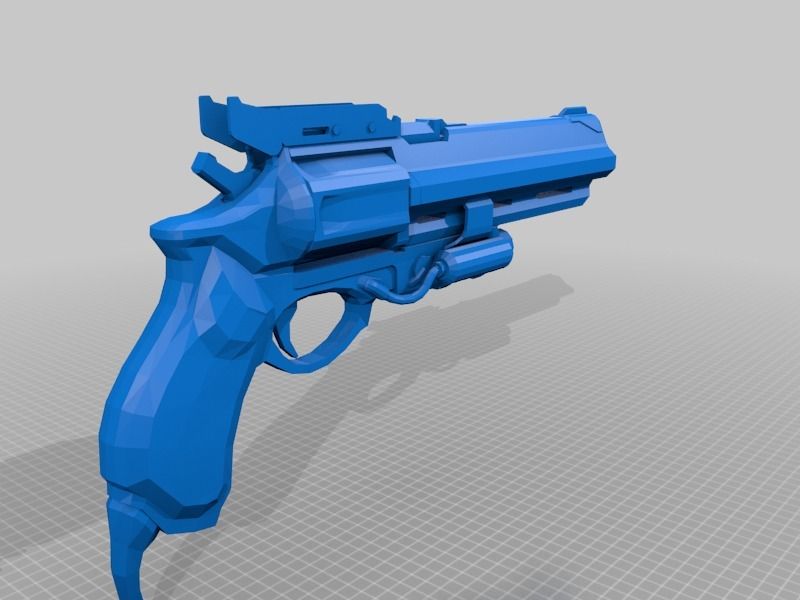 But with the same size as in the video game, it’s a little bit too big for us puny humans, 85% scale is more suitable.

Except for guns from Destiny 2, there are plenty of famous guns from various games and anime. Some of them are 3D printable and have STL files available on the Internet. Let’s take a look at some of the popular ones.

Harley Quinn is one of the most popular supervillainess characters in DC Animated Universe. She is popular with her sexy outline, demonic grin and dramatic personality.

The gun of Harley Quinn also has a style of her own. The LOVE/HATE text on the drum is a unique trademark of her. This design includes a lot of details while the gold scribblings on the barrel was made with a 3D printing pen. 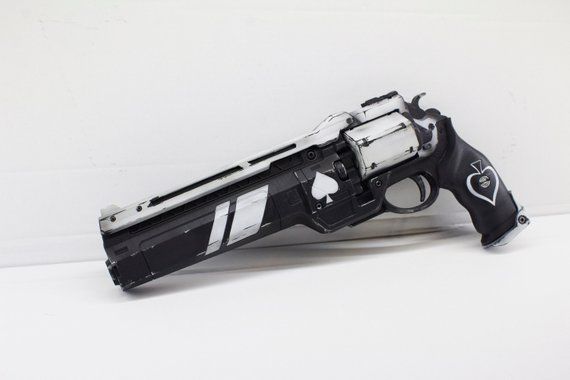 Prowler Burst PDW, or Prowler SMG, is a supply drop weapon in Apex that fires in supply drop heavy rounds. The design of the prowler is based on two real personal defense weapons: the FN P90 and the Magpul PDR-C.

This prop of Prowler is integrated, hence it’s unloadable and not able to trigger. But it’s still a really cool collection and props after being painted.

“Where’s the fun in playing fair?”

SMG is the gun that belongs to Sombra, a cyborg in Overwatch. 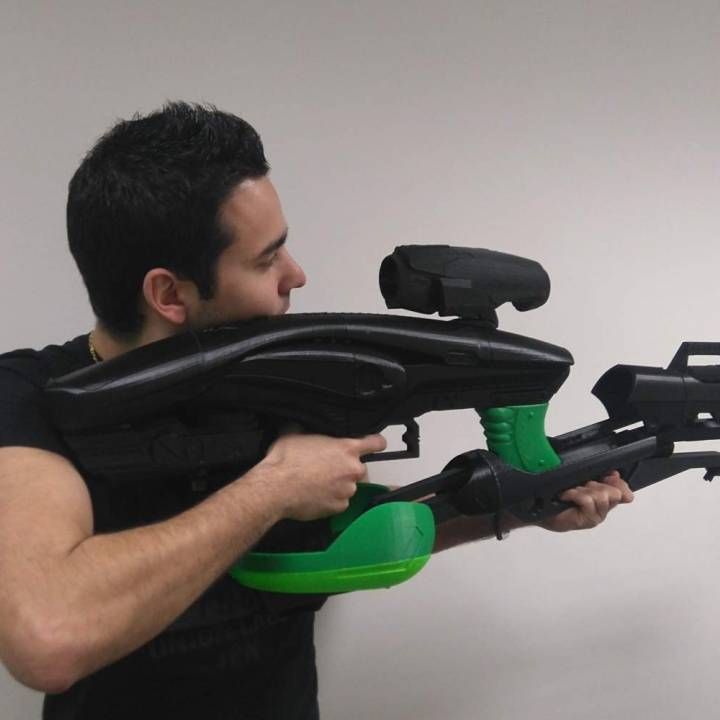 Actually, it’s not taken as a powerful weapon in Overwatch. But due to the popularity of the Sombra, the SMG is quite a frequenter in 3D printing for cosplay.

This model is pretty detailed though the designer has simplified the painting, you can try a more delicate painting on it.

Ebony and Ivory, naming referencing to the black and white construction of piano keys, are both M1911-style handguns belonging to Dante in Devil May Cry. The right-handed white gun, Ivory, was custom built for rapid firing and fast drawing times, while the left-handed black gun, Ebony, is designed for long-distance targeting and comfort.

The design of these two handguns has a few differences in detail, which the designer has noticed and modified in the model. 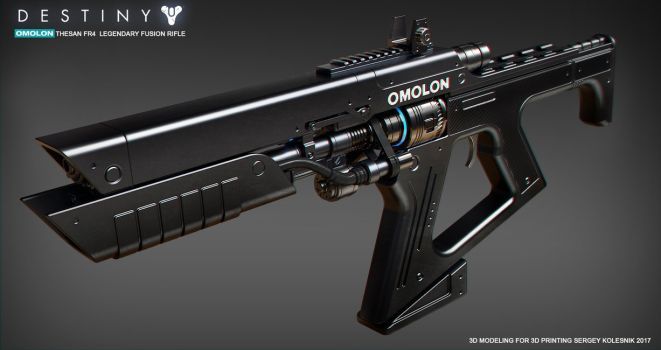 Though the files include barrel, grip, safety, body, and some other parts, it’s not so complicated to assemble.

"Fire up your Lancers, Delta."

This full-size chainsaw is quite large for a desktop 3D printer, but the designer has disassembled it into parts so that you can 3D print it on your 3D printer. The designer-recommended setting is 0.2mm layer height and 7% infill.

“The Zero Point Energy Field Manipulator is not a toy, Alyx!”

Gravity gun, the full name is Zero Point Energy Field Manipulator, is considered one of the trademark weapon of Freeman in Half-Life 2. 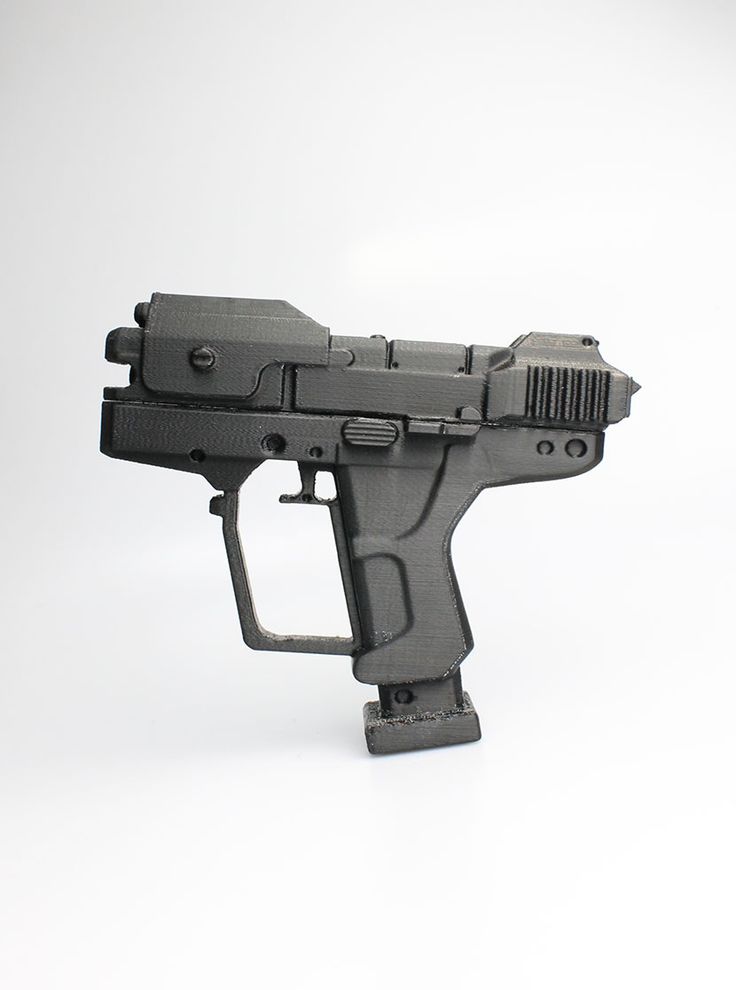 The main body and front chamber of this model are hollow so that you can install some LEDs inside. There is an assembly drawing accompanying these files to aid in printing and building. Just make sure to print the front chamber with clear PLA.

All the guns mentioned above are not able to fire while some of them can shoot with plastic bullets. Have a try on 3D printing guns by yourself! Most of them need a lot of effort, but you will get an amazing prop. And be careful with children when shooting, even plastic bullets can hurt someone.

When those early groups of tinkerers, makers and engineers got together all those years ago, building 3D printers was just a hobby that let them make objects that they would never be able to make any other way. 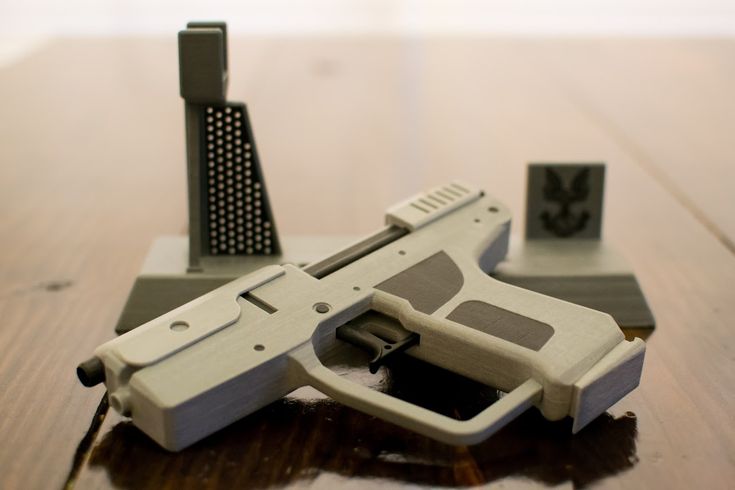 At least not without thousands of dollars and a lot of free time. While much of the focus has shifted to other parts of the industry, makers are still using their FDM printers to produce some amazing objects. From rapid prototyping to working firearms to cosplay weapons, desktop 3D printers are still changing the world in new and unexpected ways.

In the past, cosplayers and prop makers only had a few options for making things like replica armor, weapons and guns. Usually it involved sculpting foam and then hardening it with several coats of smelly chemicals, a process that was time consuming, messy and ultimately far beyond the reach of most people. But 3D printers have completely changed the way that prop weapons and costumes are made, and while they still require a lot of work and creativity, the learning curve is much lower and the quality is virtually unmatched.

When Adam Malkowski and his 3D printing services company Fabbdea 3D printing were contacted by a fan of the popular video game Destiny asking about making a replica of an in-game rifle he was thrilled at the opportunity. 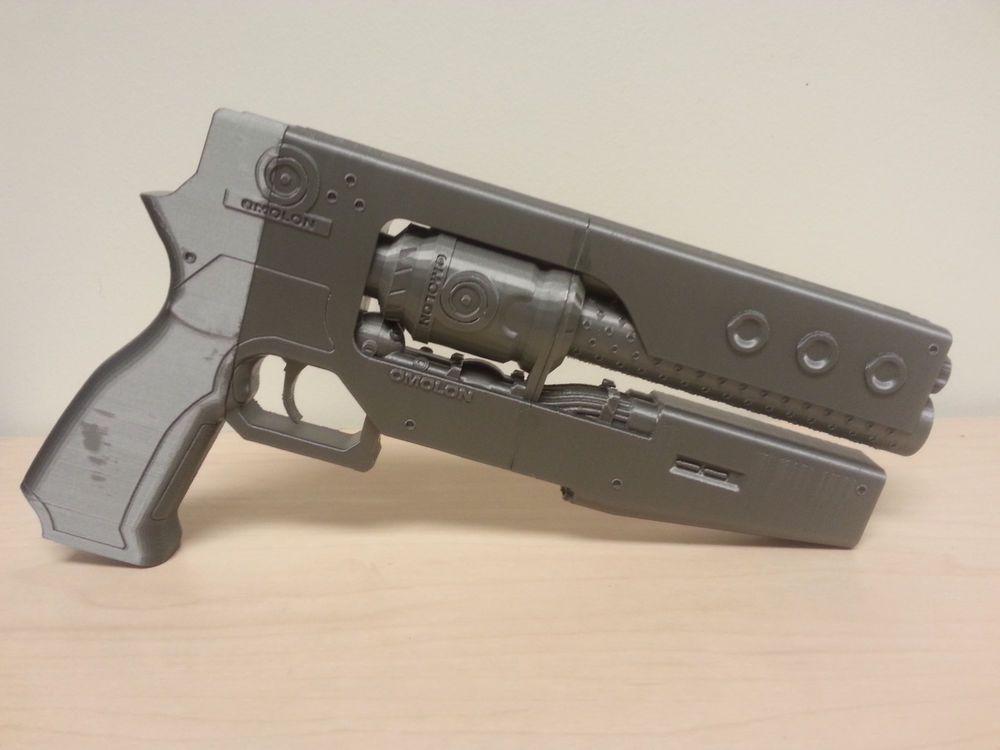 Most makers love a challenge, and Malkowski’s new client, Jay, was full of them. Not only did he want the rifle to be full-scale, but he wanted working LED lights, real in-game sounds and a magazine that can be pulled out and replaced. The Destiny rifle in question was the exotic “Arcus Rifle,” also called “SUROS Regime.”

The project was complicated, but Malkowski, and Fabbdea 3D Printing, felt that he was more than up to the task. The first step was designing the model, which as luck would have it would probably be the easiest part of the entire build. It turns out that a website called the Destiny .STL Generator will pull in-game items directly from Destiny and render them as 3D objects. Malkowski just needed to pull his new 3D file into Blender and do some remodeling to turn it into a 3D printable file.

After converting the model, Malkowski chopped it up into about forty individual parts so they could be 3D printed. Using his Leapfrog Creatr HS he printed out the parts in white PLA with a 0. 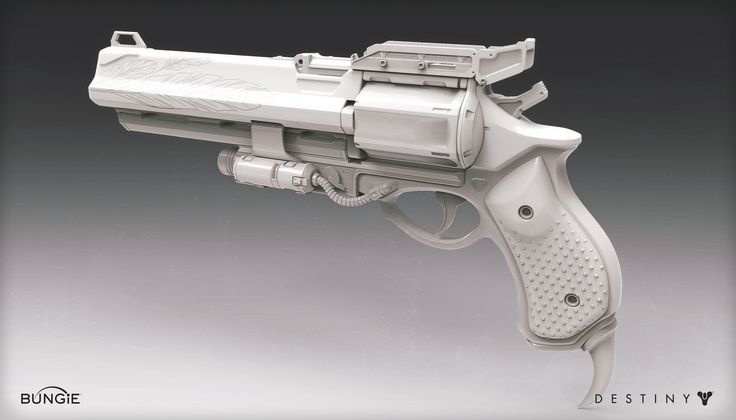 2mm layer. All together the parts took about 400 hours to print completely, mainly because he chose a slower printing speed to increase the resolution and reduce striation marks. Because the rifle was going to be life-sized and made entirely of plastic, Malkowski designed it so a copper pipe would fit inside of the rifle, holding the main parts together, providing much needed durability and giving it some realistic weight.

Once all of the parts were printed, Malkowski and local artist Steve Barnes got to work sanding all of the parts. Once they had smoothed everything down Barnes added three coats of primer to eliminate even more of the striation marks. Then followed with three different layers of paint, some intricately painted details and then two layers of a protective lacquer. Finally Malkowski installed the electronics board, several blue LED lights and a speaker to play sounds from the game.

The finished product honestly speaks for itself. Every detail was reproduced with exacting standards that would almost put most Hollywood prop makers to shape, and Barnes’ paint job is stellar. 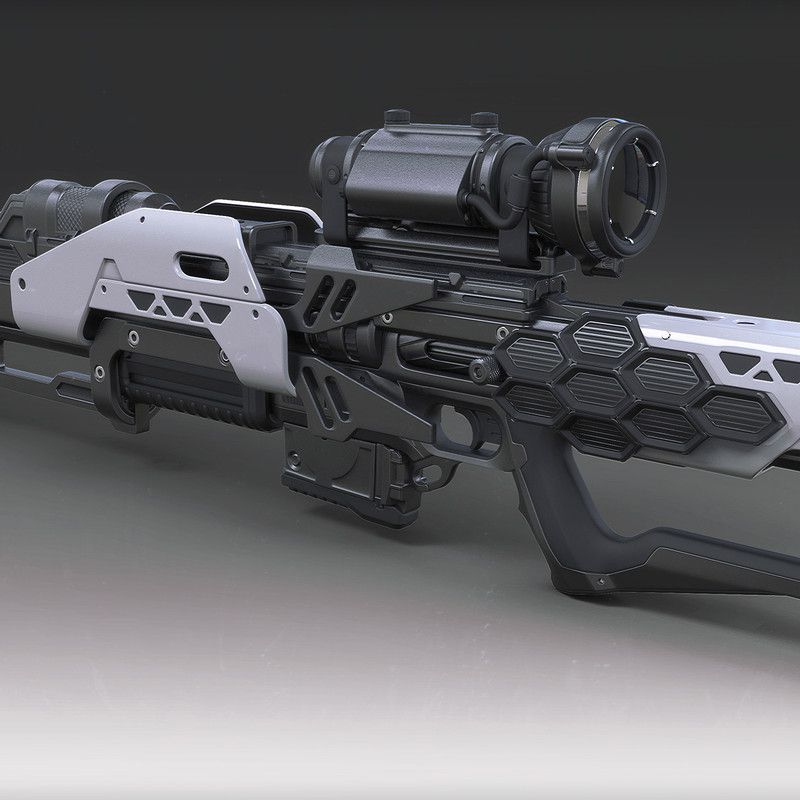 It’s even difficult to tell the 3D printer version apart from the in-game version. All together the project took well over six months and it was worth every second, at least to Jay, who told Malkowski:

“I’m really impressed with it still it looks amazing even feels amazing good heavy and for my first time with 3D it’s nothing like i imaged… its very well made and i really like it.”

Take a look at this video of the rifle for a closer look at the amazing detail:

Malkowski is offering his STL files for the rifle on Pinshape now–and you can keep an eye on his profile to see other great designs. If you would like to employ Fabbdea 3D Printing to use their services you can contact him directly on his website, over on his Facebook profile or direct message him over on Twitter.  Let’s hear your thoughts on this design in the 3D Printed SUROS Rifle forum thread on 3DPB. 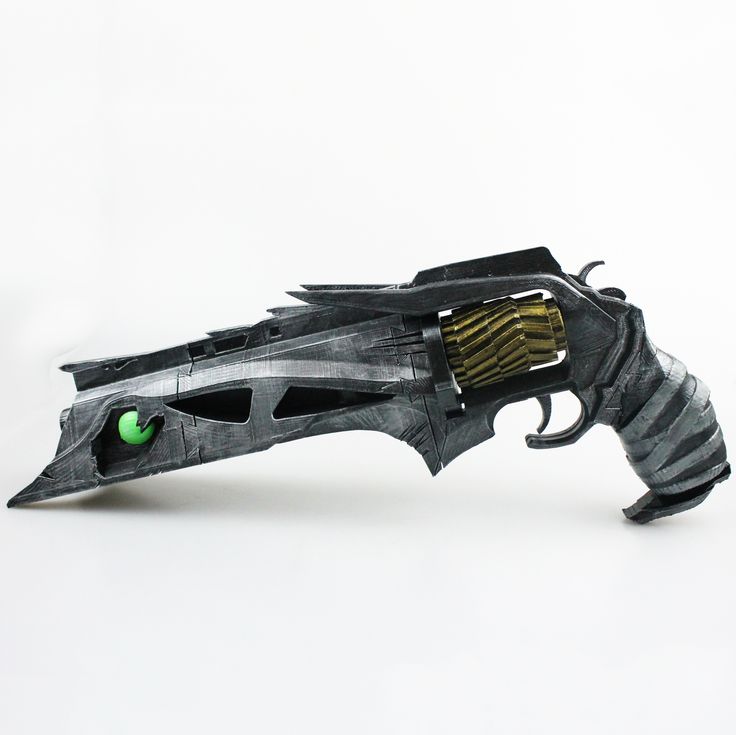 Destiny 2 Ace of Spades All in Ornament Pistol 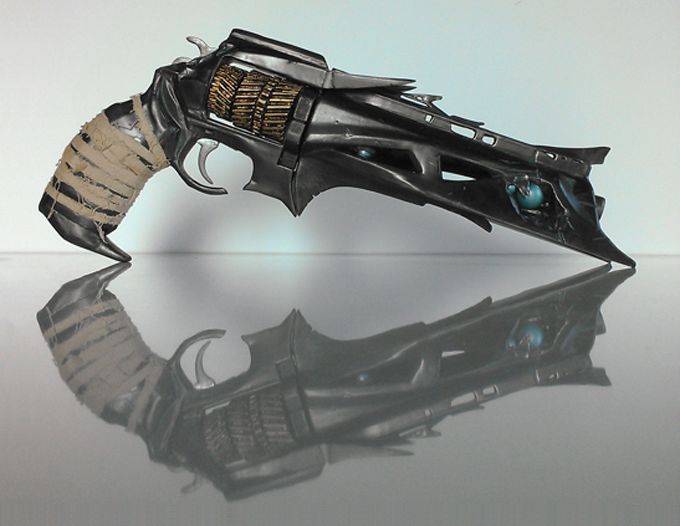 logo zelda Breath of the Wild

Bestsellers in the Game category Do you want to support Cults?

Do you like Cults and want to help us continue our journey on our own ? Please note that we are a small team of 3 people, so it is very easy to support us in maintaining activities and creating future developments. Here are 4 solutions available to everyone: 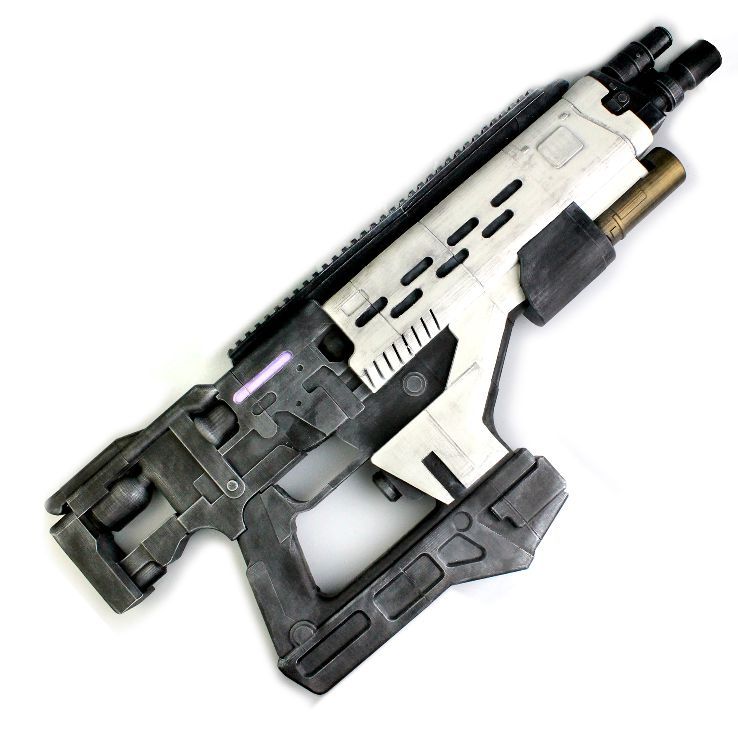 Set of two S&W No3, Schofield and Russian! 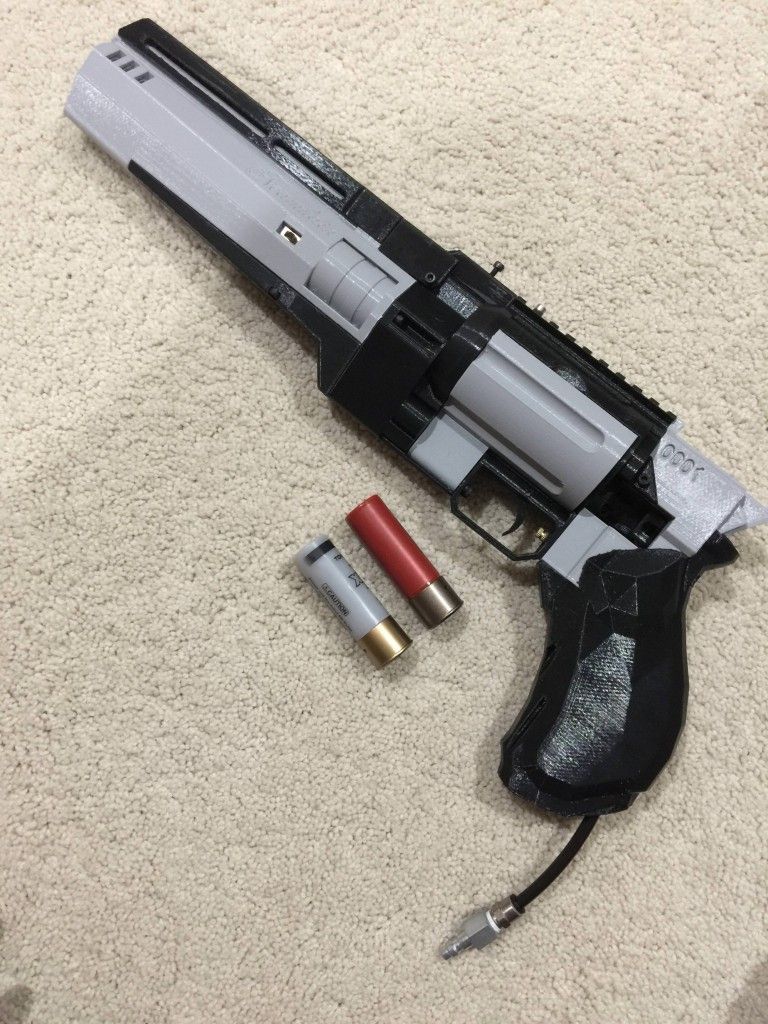 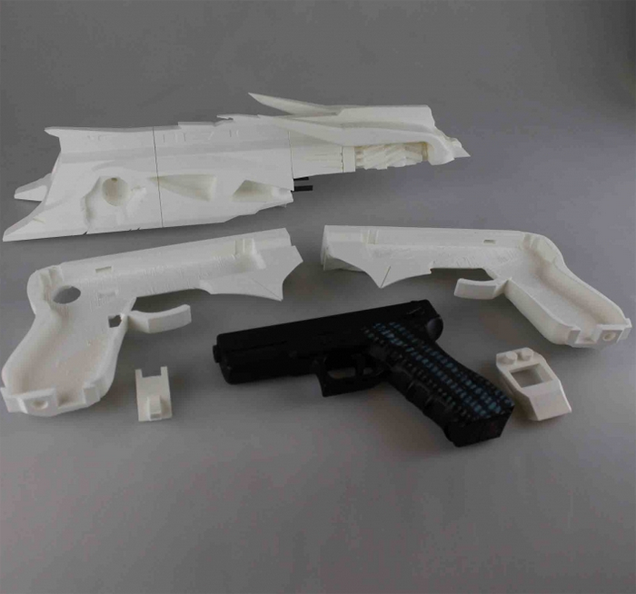