A PowerPoint 3D Printer: Missouri Teacher is Building a Unique $20 3D Printer with His Students - 3DPrint.com

When it comes to 3D printing within the classroom environment, there are some teachers who welcome it with open arms, while there are others who are deathly afraid of the technology. Some teachers have taken it upon themselves to learn how to use various 3D printers, while others have come up with some very unique lesson plans built around these new machines. However, one high school teacher in Union, Missouri is taking 3D printing to an entirely new level.

Dustin Klenke is a physics, robotics, and biology teacher at Union High School, and as part of an NSTA (National Science Teachers Association) conference that he recently attended, he learned a great deal about building his very own microstereolithographic (micro SLA) 3D printer. The presentation, which was given by a man named Joe Muskin, is part of a project run through the University of Illinois at Urbana-Champaign. It showed those in attendance the ins and outs of how to build their very own 3D printer, a printer that is based on the same concepts we see in today’s desktop DLP-based SLA printers, but which operates in its own unique way.

“The process uses an SLA gel, but instead of a laser to initiate polymerization, an ordinary data projector focused through a $3 magnifying glass displays a 2D image of each layer,” Klenke tells 3DPrint.com. “The images can be created with simple shapes in PowerPoint or slides. This solidifies an entire layer at once which eliminates the need for any moving components in the x and y-direction.”

The process is actually based on a research project that was headed up by Professor Nicholas Fang and developed at the University of Illinois. It is called microstereolithography, and it uses a simple projector to create objects with layers as small as just 400nm. Klenke tells us that $20 is enough to purchase all of the needed supplies at a hardware store. This of course doesn’t include the cost of the projector, but then again, projectors are quite common within just about every school.

“The only mechanical piece is the elevator which precisely lowers the build platform after each layer has solidified,” explains Klenke.

The way the process works is very similar to how other desktop DLP SLA 3D printers operate. A beaker is filled with a liquid polymer, while PowerPoint or a slide show is loaded up on a connected PC. To begin printing, the first PowerPoint slide is displayed through the projector which is focused on the beaker of liquid. Each image slide is exposed for about 5-10 seconds, and after each image slide comes a blank “all black” slide. When this “all black” slide is loaded, the stage on which the beaker sits is lowered, allowing the liquid polymer to flow over the existing structure. Then the next image slide is exposed, and this entire process is repeated until a full 3-dimensional object is complete. 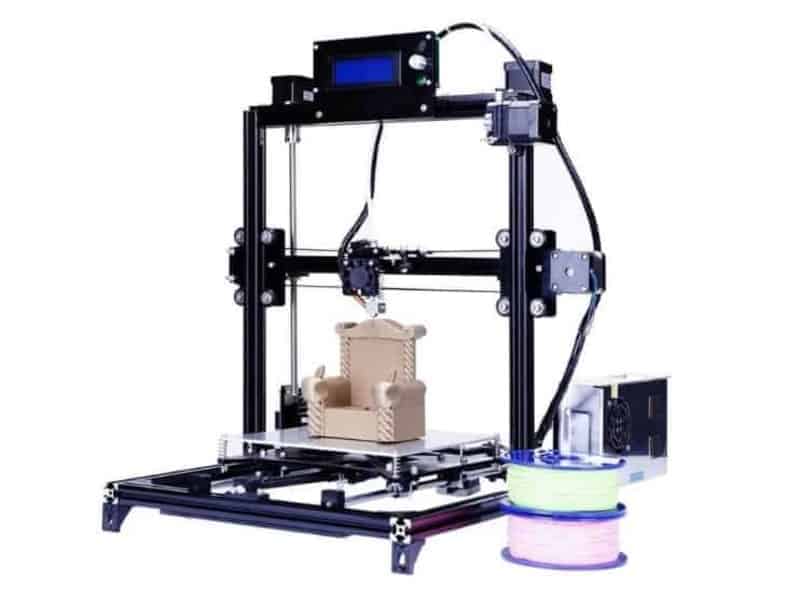 Virtually anyone with a projector can recreate this 3D printer using the following materials:

The elevator design, which Klenke’s class is in the process of building, is constructed mostly of wood, and as you can see in the images provided, the objects that this printer can create are very detailed and of the utmost quality. Klenke is one more example of a teacher who understands the importance of bringing 3D printing into the classroom. He, unlike most, is taking things a step further by allowing his students to actually build their class’ 3D printer. 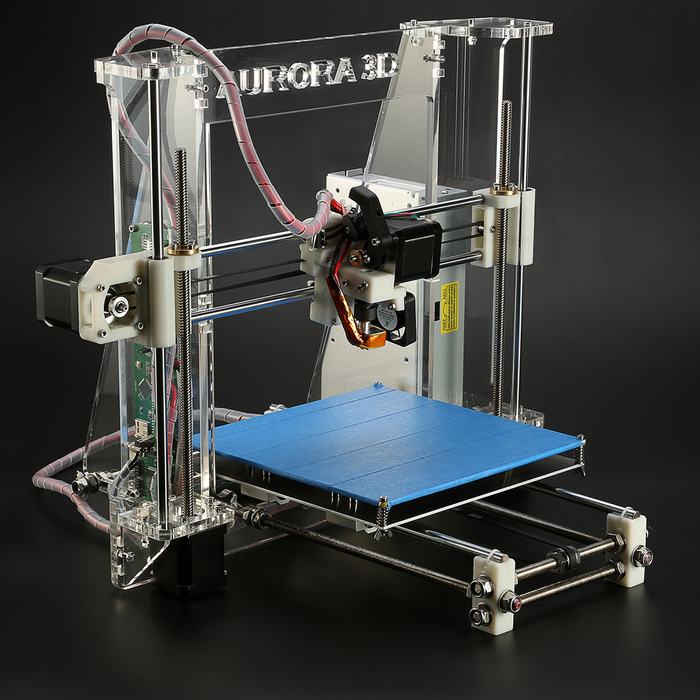 What do you think about this process, and what Klenke is doing with his students? Should more teachers be following in his footsteps? Discuss in the PowerPoint MicroSLA 3D Printer forum thread on 3DPB.com. 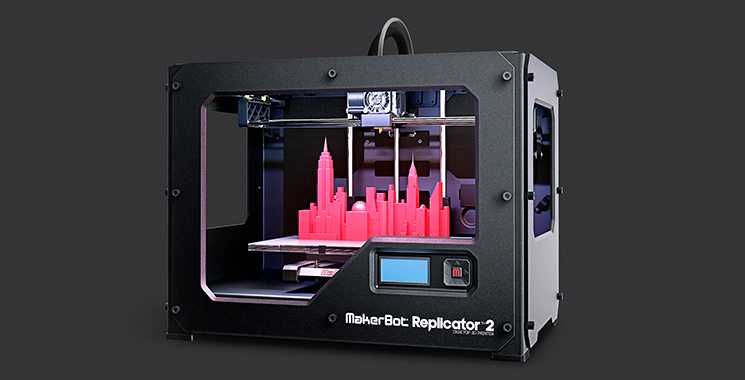 This material in pptx (PowerPoint) format contains 10 slides, use the player to view. A presentation on a given topic can be downloaded at the bottom of the page by sharing the link on social networks! Presentations are taken from open access or uploaded by their authors, the site administration is not responsible for the accuracy of the information in them, all rights belong to the authors of the presentations and can be deleted at their request.


Purpose:
to prepare people's minds for the inevitable evolution of foods in our diet in the near future
Objectives:
to share about promising developments in the food industry;
show how the products of the future look like


Not all food ingredients can be 3D printed;
3D cooking process is quite slow;
the finished dish must be cooled before eating

Limitations when using a 3D printer: 
THANK YOU FOR YOUR ATTENTION!

This is a presentation site where you can store and share your presentations, reports, projects, templates in PowerPoint format with other users. 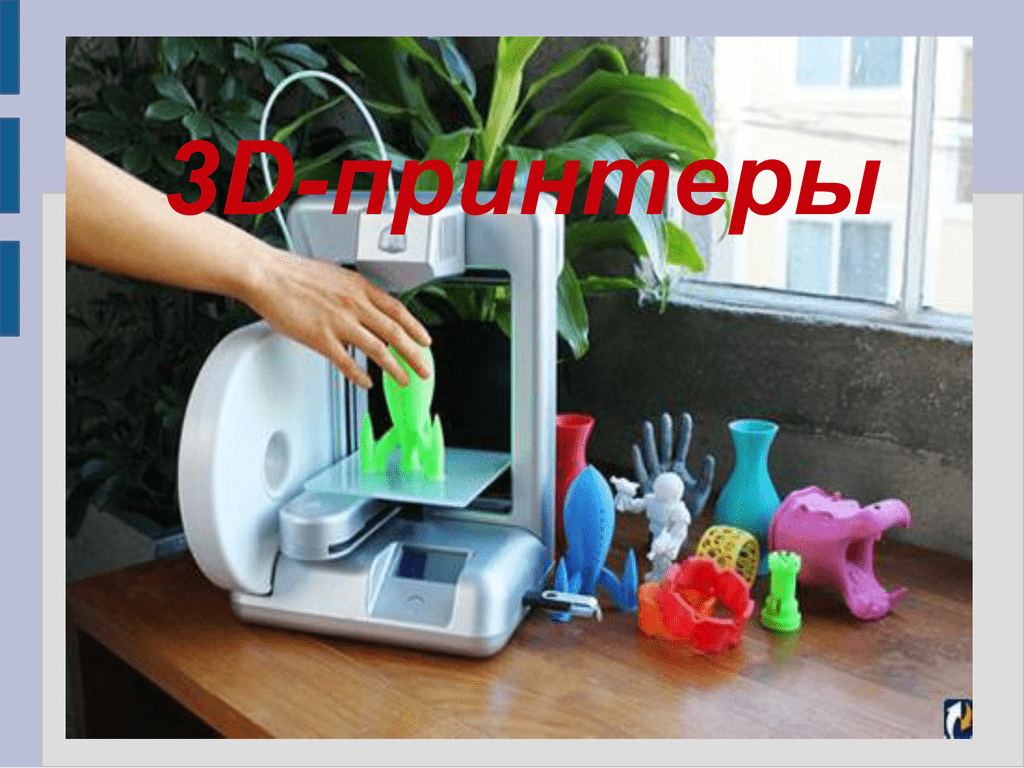 creating a physical object from a digital 3D model. In foreign literature, this type of device is also called fabber, and the 3D printing process is called Rapid Prototyping.

What is a 3D printer?

The principle of operation of a 3d printer is based on the principle of gradual (layered) creation of a solid model, which, as it were, is “grown” from a certain material. The advantages of 3D printing over the usual, manual methods of building models are high speed, simplicity and relatively low cost. 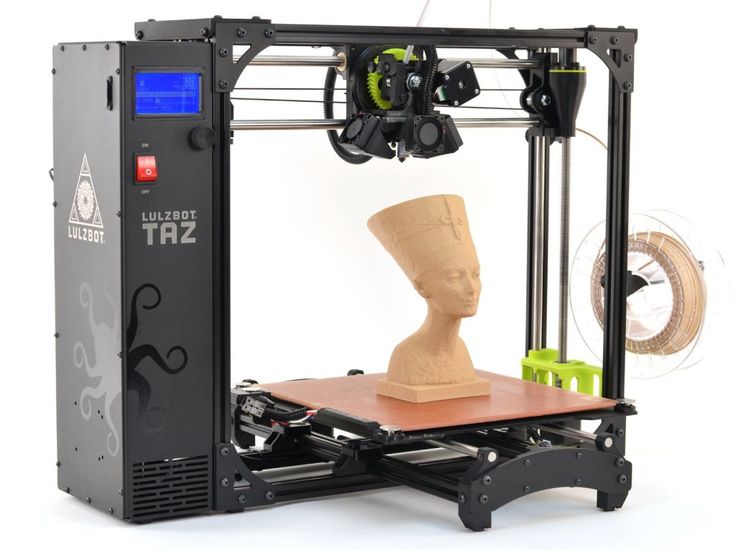 There are various 3D printing technologies. The difference between them lies in the way the product layers are applied.
The most common are SLS (selective laser plexus), HPM (molten material overlay) and SLA (stereolithiography).

The most widely used technology due to the high speed of building objects is stereolithography or SLA.

The technology works like this: a laser beam is directed at a photopolymer, after which the material hardens.

The photopolymer is a translucent material that deforms when exposed to atmospheric moisture.

Once cured, it can be easily bonded, machined and painted. The working table (elevator) is in a container with a photopolymer. After the laser beam passes through the polymer and the layer hardens, the working surface of the table moves down. 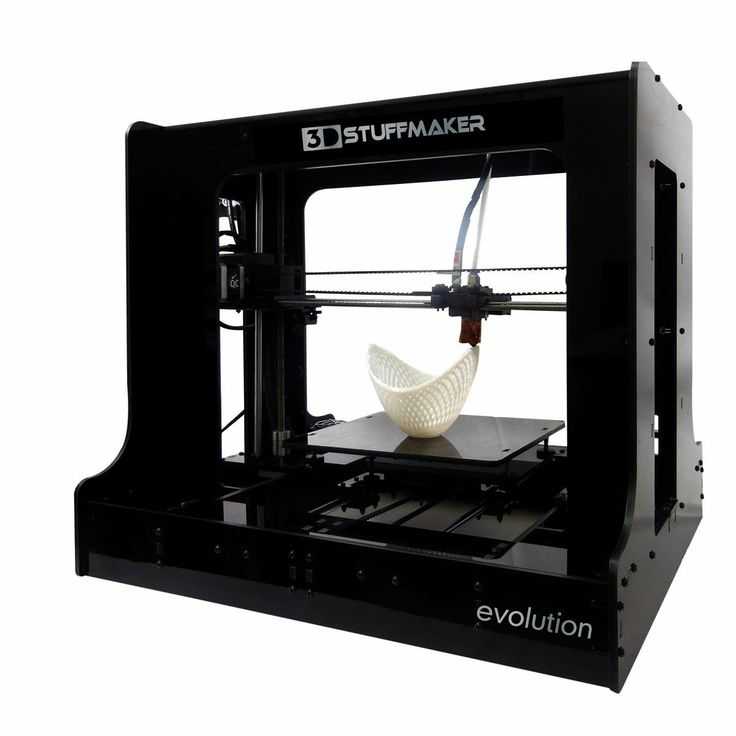 Laser beam sintering of powder reagents - aka SLS - is the only 3D printing technology that is used in the manufacture of molds for both metal and plastic casting.
Plastic models have excellent mechanical properties, which make them suitable for making full-featured items. SLS technology uses materials that are similar in properties to the brands of the final product: ceramics, powdered plastic, metal.
The 3D printer device looks like this: powder substances are applied to the surface of the elevator and sintered under the action of a laser beam into a solid layer that corresponds to the parameters of the model and determines its shape.

DLP technology is new to the 3D printing market. Stereolithographic printers are positioned today as the main alternative to FDM equipment. 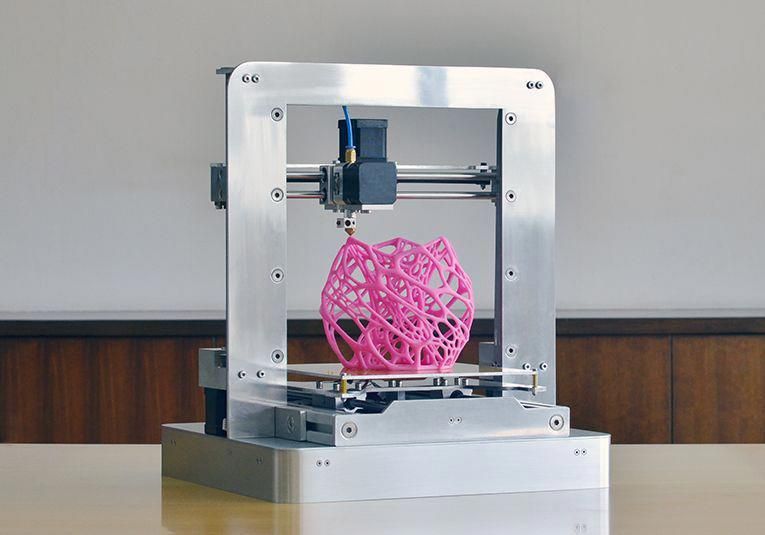 This type of printer uses digital light processing technology. Many people wonder what the 3d printer of this sample prints with?

Instead of a plastic filament and a heating head, photopolymer resins and a DLP projector are used to create three-dimensional figures.

Despite the intricate name, the device is almost indistinguishable from other desktop printers. Its developers, represented by
QSQM Technology Corporation, have already launched the first samples of high-tech equipment into a series. It looks like this:

Allows you to create not only models, but also final parts from standard, structural and high-performance thermoplastics. It is the only technology that uses production grade thermoplastics to provide unparalleled mechanical, thermal and chemical strength to parts.
HPM Printing stands out for its cleanliness, ease of use and suitability for office use. 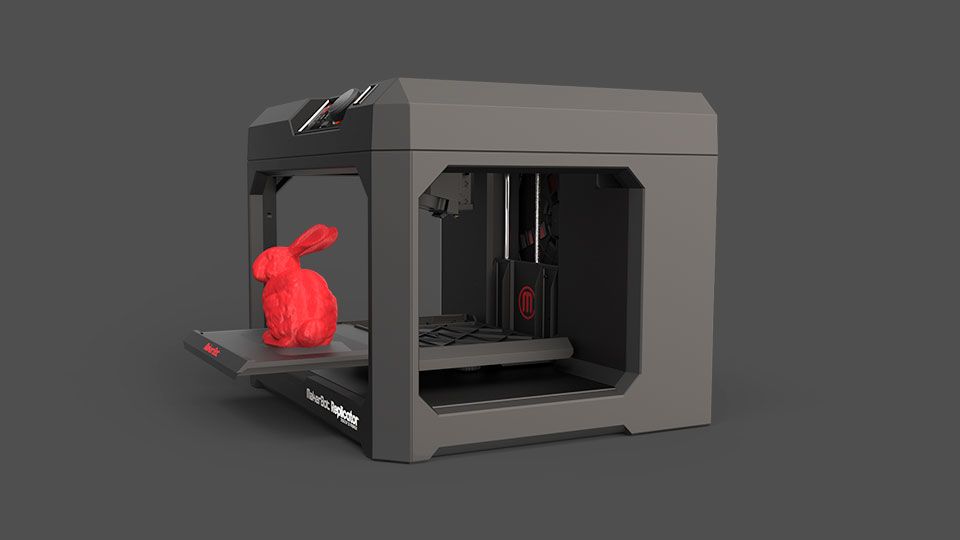 Thermoplastic parts are resistant to high temperatures, mechanical stress, various chemicals, wet or dry environments.
Soluble auxiliary materials allow the creation of complex multi-level shapes, cavities and holes that would be problematic to obtain with conventional methods. HPM 3D printers create parts layer by layer by heating the material to a semi-liquid state and extruding it according to computer-generated paths.
When the 3D printer has finished creating the part, it remains to separate the auxiliary material mechanically, or dissolve it with detergent, after which the product is ready for use.

Hand-printing pens are also popular these days. Moreover, it would be correct to call them not printing devices, but pens for drawing three-dimensional objects.

Pens are made in the same way as fusing printers. The plastic thread is fed into the pen, where it melts to the desired consistency and is immediately squeezed out through a miniature nozzle. 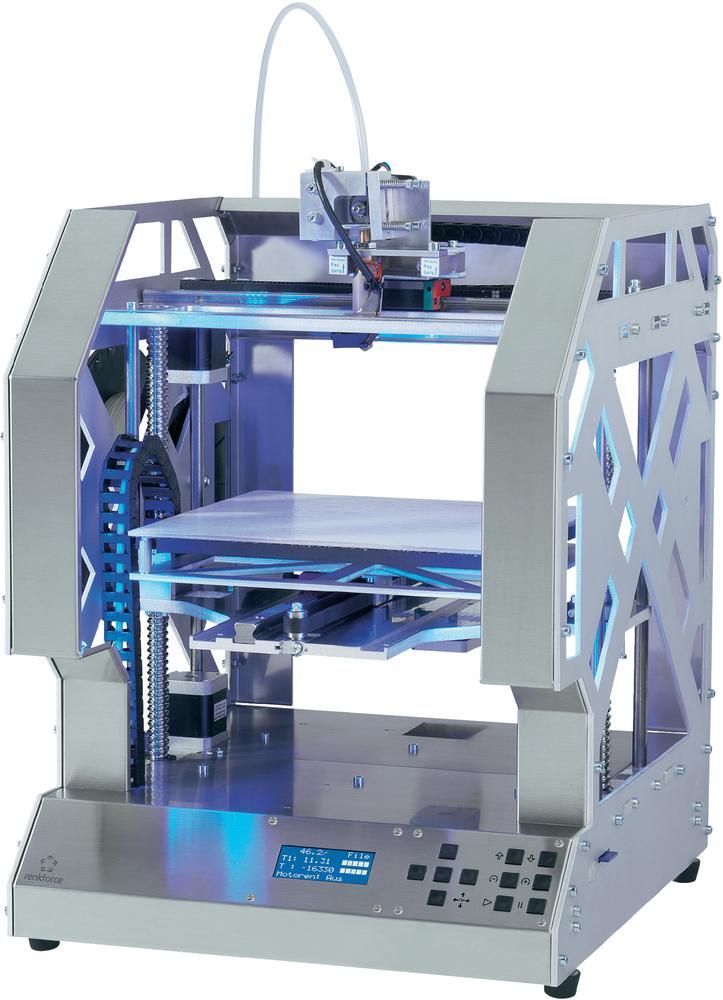 3D printing has opened up great opportunities for experimentation in areas such as architecture, construction, medicine, education, fashion design, small-scale production, jewelry, and even in the food industry. In architecture, for example, 3D printing allows you to create three-dimensional models of buildings, or even entire microdistricts with all the infrastructure - squares, parks, roads and street lighting.

Thanks to the cheap gypsum composite used, the cost of finished models is low. And more than 390 thousand CMYK shades make it possible to embody any, even the most daring, imagination of an architect in color.

3D printer: application in the field of construction

In construction, there is every reason to believe that in the near future the process of erecting buildings will be much faster and easier. 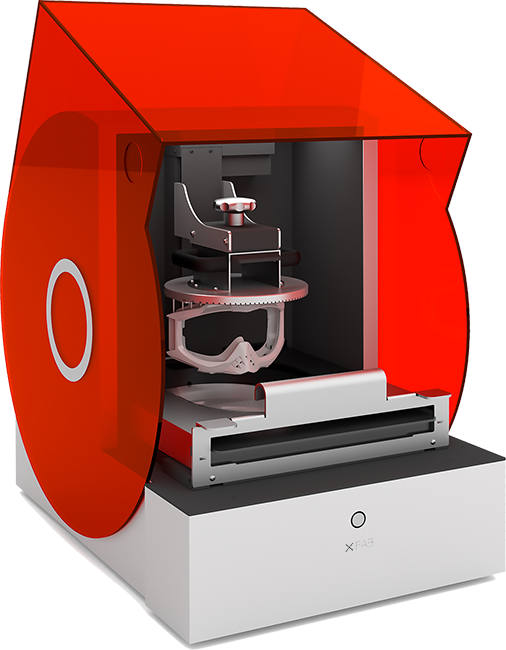